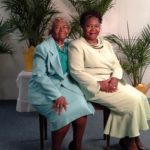 Hannah was already a senior citizen when she bought her house at the height of the subprime mortgage scams in 2005. Unbeknownst to Hannah and her family, the mortgage broker had falsified her income to make her qualify for the loan and rake in profit from the fees.

She could barely afford the mortgage but had managed to keep up with the payments until 2011, when she lost her job as a caregiver. At the same time, the value of her house had plummeted, making it impossible for her to refinance into a more affordable mortgage.

Winnie tried to help her mother Hannah take advantage of the federal HAMP program which requires mortgage servicers to work with homeowners, in or on the verge of delinquency, to modify their mortgages so they can keep their homes. But Hannah’s mortgage holder (one of the largest banks in America that had recently bought her mortgage) was not playing by the rules. The bank dragged out the process for years, requesting and then claiming to lose financial documents five or six times.

Now in her late 70’s, Hannah’s health was deteriorating from the constant worry that she would lose her home. Then mother and daughter came to the Northwest Consumer Law Center.

Staff attorney Katy Box began by submitting a formal demand for a higher authority at the Bank to review Hannah’s application. She sent in hundreds of pages of documents on Emma’s behalf every week for over six months. The Bank still refused to review the application, instead setting a new foreclosure sale date to take away the home. Katy filed bankruptcy for Hannah to stop the foreclosure process and give her more time to get the application through the system.

When it became clear that it would not be convinced to cooperate any other way, Katy filed a lawsuit against the Bank for bad practices. The lawsuit dragged on for an entire year, until finally the Bank agreed to modify Hannah’s loan to settle the case.

Her mortgage now reduced to within her means, Hannah can rest easy for the first time in years, confident that she will be able to enjoy her retirement in her own home.